Liu Zhuoquan was born in Wuhan, Hubei Province, China, and spent a number of years living and working in Tibet.He currently lives and works in Beijing. 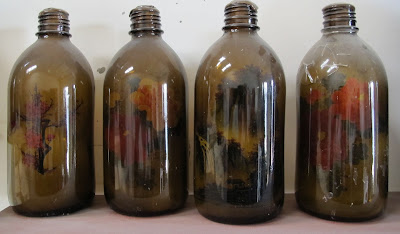 Liu Zhuoquan works with traditional craftsmen who have mastered the ancient art of 'inside painting', or ‘neihua’ once used on the beautiful snuff bottles dating from the Ming and Qing dynasties. In Liu Zhuoquan's practice, however, they become ways of making a comment on many aspects of life in China today. The bottles, which in Liu’s practice are found objects, used bottles which have held a range of products, in varying sizes and shapes, are delicately and precisely painted on the insides. Precise technique and the use of fine brushes create immensely detailed and realistic representations of people, the natural world of plants and insects, as well as political imagery from the Cultural Revolution and contemporary events in China and the wider world. Barack Obama features on one bottle.  Liu sees his work as suggesting a scientific laboratory, as the bottles (discarded and 'found' objects referencing the everyday) contain beautifully painted, miniaturised 'experimental material' relating to nature, biology, human society and also to politics. Liu Zhuoquan, although born in Wuhan, spent many years in Tibet, and the beliefs and practices of Tibetan Buddhism have profoundly affected his world view and his own art practice. The artist is assisted in the creation of these works by artisans trained in traditional techniques - in this way his practice may be connected with other contemporary artists both in China and internationally, such as Ah Xian, Antony Gormley, Patricia Piccinini and Janet Laurence. They also comment on our mania for classifying and thereby containing the world and everything in it – a wry Buddhist comment on the impossibility of controlling our world. (Luise Guest)

The Artist and His World
Some of the bottles reference the present, and the dramatic changes people must accommodate in their daily lives as China embraces the global economy. For example, some have expensive branded sneakers painted in them, whilst others reference more controversial subject matter. He sometimes enters territory that is a subtle and carefully encoded critique of aspects of modern China, with works referencing such issues as the death penalty and the way in which executions are carried out; the 'harvesting' of organs for transplant from prisoners; the damage to the environment from rapid industrialisation; and issues of censorship. Others contain lovingly painted landscapes, plants, fish, birds and insects. They are not obviously political, rather they refer to Buddhism and to the world view that Liu Zhuoquan found in his years spent in Tibet, where the natural, spiritual and material worlds are connected. It is in the juxtapositions of multiple bottles – the proposed installation of 10,000 of these delicately painted microcosms – that multiple meanings and interesting counterpoints can be formed and found.

Look at the artworks and answer the questions below:

Structural Frame
Outline the techniques used by Liu Zhuoquan to create these works, both individually and in the form of site-specific installations

Subjective Frame
Imagine the response of the audience to an installation of 10,000 of these painted bottles, surrounding them on all sides – how might the audience respond?

Cultural Frame
Compare the work with a traditional Chinese landscape painting from the Song dynasty – find similarities and differences between the two.

The works below, '3 Black Fish' and '4 Red Fish' are typical of his practice.

What makes his work different from traditional Chinese paintings?


Read the extracts of art critical writing about Liu Zhuoquan and respond to the questions.

The production of museum-scale installations may at first glance seem incompatible with the work of Liu Zhuoquan, an artist whose practice centres on the well-known craft of snuff bottle painting. Popular items in the tourist trade, these pocket-sized vessels are painted charmingly from within; a disarming technique perfected by Chinese artisans with nothing but long-haired brushes and patiently practised skill. Liu Zhuoquan takes the production of these items to an epic and prodigious level, amassing them row upon row in concert with other similar items. Acquisition of these bottles is customarily a thing of individual selection, a memento of personal choice. Bringing so many together however, they register not as things precious and rare but rather as products of mass production – the efforts of nimble, anonymous hands who scrabble in the markets of labour. What, one wonders, are the conditions under which items of this nature are produced? …In place of touristy vignettes, medical diagrams of dissected organs and limbs are displayed gruesomely therein. Reminding one of the disparities between the citizens of developed nations, and those in the sweatshops of the world, the likes of which remain the basis of our global economy, what the bottles contain is not some artistic endeavour but the life, limbs and essence of the worker who toils for the amusement of others. With the passing of the Cultural Revolution, crafts of this nature, once forbidden as decadent things of the past, steadily returned to China’s bustling markets. Somewhat surprisingly Marxist and Maoist ideology appears to haunt these delicate works. Created in the latest era of Chinese prosperity they contain not only images but the essence and echoes of toil.
Damian Smith, Beijing 2010 (China Art Projects Catalogue for Melbourne Art Fair 2010)

Read Critical Analysis Extracts #2 and #3  about Liu Zhuoquan and respond to the questions.

He began collecting discarded bottles of all shapes and sizes, from perfume bottles to Coke bottles. Painting on their insides with fine, bent-handled brushes and dilute mineral colours, he “inserted” plants, animals, monsters, mountains, weapons, furniture. Influenced by eight years in Tibet, where he embraced Buddhist spirituality, he set out to compile a library of 10,000 things. The bottles in his Object Series (2007) look like scientific specimen jars. Placing one or two items in each bottle isolates them but also allows them to be freely combined. For Liu Zhuoquan the bottles are like words; together they “describe the world”. Their glass containers—visible or invisible “depending whether you look at the bottle itself or the painting”—give them an aura of mystery.
http://www.whiterabbitcollection.org/artists/liu-zhuoquan/

Critical Analysis #3 ‘Thousands of Worlds: Liu Zhuoquan and the Archeology of Objects’ by Huang Du

(this piece has been translated from the Chinese)

"He collects various peculiar bottles which have been consumed, and then paints the insides of bottles using the chosen topics. This becomes the highlight of inner bottle painting. This is an art form which evolves from traditional Chinese folk snuff bottle inner painting. What differs from the traditional art is that Liu Zhuoquan’s art focuses on integrating each independent inner bottle painting into a unified art concept which is similar to a drug store or a storage room instead of the painting skills of snuff bottle inner painting. He rearranges the daily objects which are intensive yet organized, and connects these objects with the bottles which still have the original brand labels on: bottle with residue, bottle painted with broken fingers, bottles painted with plants, organs, weed, insects, fish, bricks and other countless objects. This is a brand new world created by artist. It is an image world just like an encyclopedia and also an exhibition of bottles. Although this art piece is of hybridity visually, the overall visual image conveys obscure dualism in philosophy, which is unity of opposites between experience and transcendentalism, normal and abnormal, violence and gentle, poetic and plain, warm and cold, abstract and realistic, expressive and reserved…

The writer of Critical Analysis #3, Huang Du, suggests that the artist’s intention is not about the skilful application of technique, nor about beautiful representations.

This particular work references the injuries (specifically lost fingers) in Chinese factories, where workers often have no choice but to work in unsafe conditions.

Having read all of the information and looked closely at the artworks, answer these questions

Look at Liu Zhuoquan's own web site by clicking on this link HERE and see many more photographs of this installation.

An Art Teacher in China
Luise Guest is a Sydney-based writer, art educator and researcher focused on China and contemporary Chinese art. Since 2010 she has travelled between Australia and China to interview artists in their studios, explore the extraordinary and constantly changing Chinese artworld and study Chinese, an endeavour that continues.